This article is must reading. Then it’s a must stop doing. In this article by Mike published on the blog mikeinsac.com, the author relates tragic stories of how churches tend to disbelieve victims of abuse by pastoral leaders. Please be careful of triggers in this post and in the article at the link.

“The teacher knew she was a mandated reporter, but decided to report it to the school instead of the police. She told one of the vice-principals. He was also a mandated reporter. But he decided to tell the elders of the church about the accusation. They told the Senior Pastor and the investigation was on…

They had not handled it correctly. They should have gone to the police.”

Why are churches slow to believe the survivors of abuse? Why do they often protect abusers?  The author suggests the following reasons. Please read the article for the full details.

I encourage you to read the full article and apply what you learn in your faith community. There is a spirit of murder against the women and children of this world and it’s time we start fighting back. 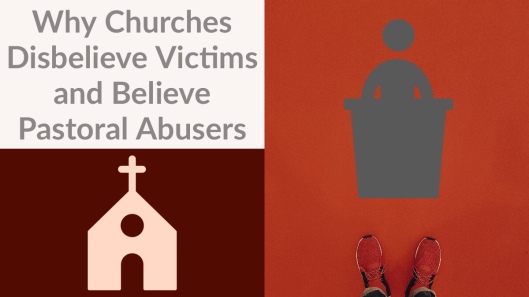 He was the principal of the Christian school which met at the church. His dad was the Senior Pastor. He had four years of teacher training and all the obligatory certifications, internships, and education needed. He added a Masters Degree in Theology and another Masters in Educational Administration. He was fully qualified to do the job he was doing.

During the five years he had been principal, his dad’s church had grown from 200 members to almost 1500. In that medium-sized town, the church dwarfed all the others. The main draw for newcomers was the Christian school.

And that’s when the accusations started.

One 8th grade girl told her teacher she wasn’t going to detention any longer. (Note: The school practiced corporal punishment and a very difficult regimen of consequences for even the smallest infractions. Detention often meant at least an hour of menial labor, supervised by a teacher or…

Sadly, this is a very real experience and one that hits home to me for two reasons. In the past, I saw this

kind of thing and didn’t know what was happening. I regret not having the knowledge and the backbone to make a difference in those situations.

It also hits home, because one of these people got me in just the way Shannon Thomas describes. While I was taken aback by the shock of it all, the part that hurt, still hurts, is how people I counted as friends so easily turned to the negative. One co-worker called me shortly after the major attack, revealing that he had been “filled in on the story” just before the meeting and suggested I “just apologize” to the accuser. My flying monkey alarm bells went off big time. I now keep safe distance from that co-worker. The worst part is, he is a key leader in the church and I am concerned that his willingness to be a flying monkey will harm  those to whom he ministers.

I encourage you to check out Shannon Thomas’ book, “Healing from Hidden Abuse: A Journey Through the Stages of Recovery from Psychological Abuse.” Her book is available as paperback, Kindle, and audiobook.

Remember that not everyone who is a jerk is a narcissist, sociopath, or psychopath. If we’re honest, we’ve all done things we’re not proud of. However, if you have a person in your life who demonstrates repeated narcistic-like behaviours without genuine remorse (on my blog do a search for “Diversion Tactics), then you need to be very careful, establish boundaries, and perhaps seek professional assistance.

Do you ingest supplements – vitamins, amino acids, etc? I have. I’ve tried all sorts of supplements for all sorts of reasons – muscle building, fat losing, more energy, and so on. I believe none of them have ever made a difference or manifested the results promised on the bottle.

I recently shared an article by Alex Hutchinson on water and exercise. I also found this article on supplements called, “The Pills We Pop.” I encourage you to read the whole article but here are a few quotes that stood out to me.

…the National Institutes of Health was investing $250 million to $300 million per year in supplement research, the vast majority of which found no benefits (or, in a few cases, increased risk).

…advertising claims don’t have to be vetted by the FDA, and you can choose whatever flimsy evidence you want, even if it’s contradicted by a mountain of evidence.”

Alex Hutchinson also wrote the book, “Which Comes First, Cardio or Weights? Fitness Myths, Training Truths and Other Surprising Discoveries from the Science of Exercise.” Hutchinson takes 111 common (and uncommon) questions about fitness and digs up the current state of peer-reviewed knowledge. If you’re into exercise, I recommend the book because it cuts through a lot of junk.

(Just in case you are wondering, that’s not me in the picture.)

“Likewise, the god whose moods alternate between graciousness and fierce anger, the god who is tender when we are good and relentlessly punishing when we are bad, the god who exacts the last drop of blood from his Son so that his just anger, evoked by sin, may be appeased, is not the God revealed by and in Jesus Christ. And if he is not the God of Jesus, he does not exist.” (Above All, 2003, p. 58-59)Brennan Manning

“He was a murderer from the beginning. He has always hated the truth, because there is no truth in him. When he lies, it is consistent with his character; for he is a liar and the father of lies.” John 8:44 NLT

The Bible makes it clear that this fallen angel has deceptive practices. What I have noticed is that we usually think of these deceptive practices in terms of theology – “the truth.” Certainly Satan has distorted the things of God, turning heaven’s blessings into things that lead to self-righteousness, confusion, and despair.

But is that it?

The first lies recorded (although we know he was already telling them in heaven) are the the lies about God’s character. He lied to Adam and Eve about God’s love and care for them. The lies were relational.

What if Satan’s deceptive practices begin with or are grounded in lies about others? It would be in his best interests if we think the worst about others – their beliefs, their practices, their intentions and character. I also suspect that we reveal our acceptance of the lies and our culpability in spreading them when we say, “All (insert person or group) are (insert belief, practice, intention).”

It makes it way more easily to demonize, pigeonhole, segregate, ignore, those who we deem to be one dimensionally evil. The end result is fear, mistrust, hate – poison to our Father’s Kingdom.

In the last letter of the Bible, the Revelation of Jesus Christ, God sends a last message of warning to a dying planet – Revelation 14:6-12. This message is given by three angels to “those who dwell on the earth;” people who hate God and hate those who love God. It’s a serious message – the consequences are life and death – but it’s a message given in great love because God is willing to go to the uttermost to reach even his most aggressive enemies.

In my last post, I wanted to show that the mark of the beast is the beast’s name and it’s in contrast to the seal of God, which is God’s name. In both cases, we end up with one or the other name written on our foreheads. This runs to the very core of who we are and what direction our life is taking.

Okay so what does it mean to have the Father’s name?

In one sense, it’s about belonging.  As the song goes, I am my beloveds and he is mine.  When I was little, my dad was out of the picture but when I was 7, my mom was married to a man I now call dad.  After they were married, he adopted me as his son and I have his name.

Have you been adopted by your dad in heaven?